Finally, the end is in sight - at least for now. Closing Statements from all the parties will take place over three weeks, from November 18 to December 5th. We will make our Closing Statements on December 4th, and with the final response from the Plaintiffs on December 5th, it will be up to the judge to decide the fate of our health care system. With over 30,000 pages and 180 days of evidence, it will take Judge Steeves 6 months or more to make a ruling.  Your support is crucial at this stage - we will be asking people, you, to come to the courthouse, write letters to the editor and donate to cover the costs of our lawyers. Watch for our emails and thank you for being a part of this historic court challenge.

Marie-Claude Premont is on the stand today

This morning at 10am, our first expert witness, Marie-Claude Premont, respected Professor of Law, will be taking the stand to talk about why provincial health care legislation that puts restrictions on extra-billing and duplicative private health insurance is crucial for universal public health care. This is the legislation that Brian Day wants to get rid of and which will lead to Canada having US-style private insurance-based health care. You are invited to attend and hear what she has to say - at BC's Supreme Court (Courtroom #43 - 800 Smithe Street).

May 13 - Marie-Claude Premont takes the stand 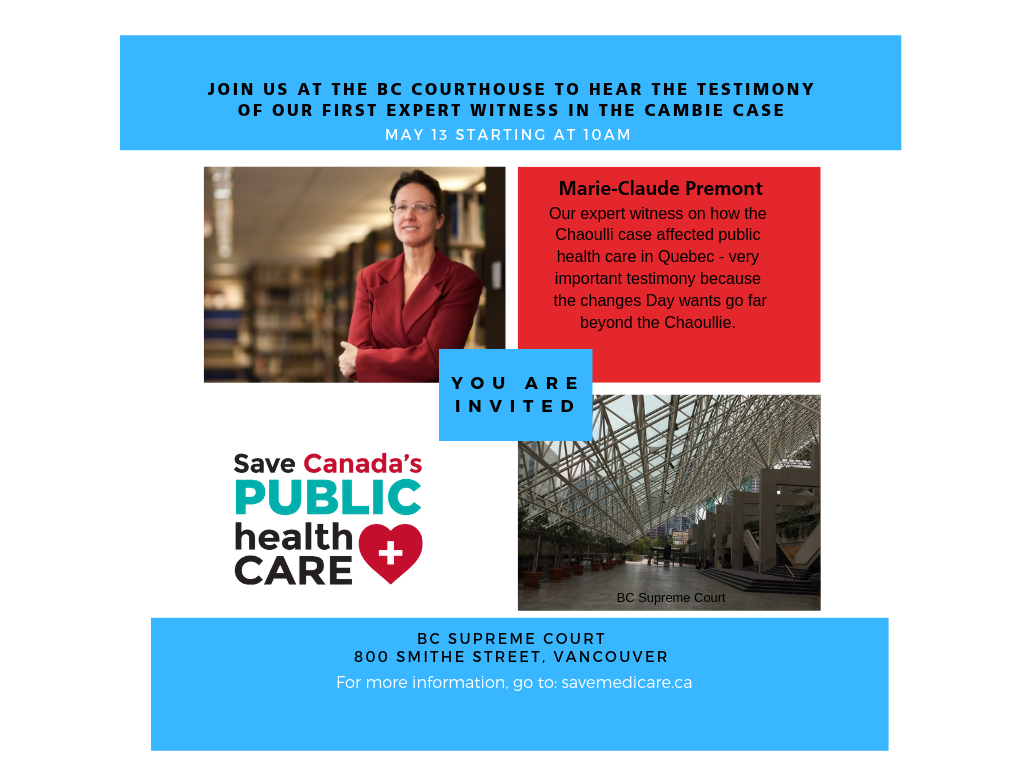 After months of testimony from Day’s side in the case, on May 13 it’s our turn before the judge - and we'd love to see you there.

Our first expert witness is Marie-Claude Prémont, a well-respected Professor of Law at the École Nationale d'Administration Publique. Marie-Claude will present evidence on how Chauolli v. Quebec, a court decision in Quebec that put restraints on medicare, has made it harder for patients in that province to get the care they need.

Prémont’s evidence is critical for the court to hear because the changes to our health care system that Day is seeking go far beyond the Chaoulli case. Day wants to change the rules so that any doctor can charge patients unlimited amounts for all procedures and services, and to introduce an American-style system of parallel private care and insurance. That would put private insurance companies in the position to deny patients health care coverage for any service from visits to the emergency room to cancer treatments.

Our evidence in the case will prove that Brian Day’s vision for health care in Canada would harm patients’ health, disrupt medical practices, drive health costs up, and weaken the Canadian economy.

If you’re able to join us at the courthouse in Vancouver on Monday to hear our first expert’s testimony, we’d love to see you there - BC Supreme Court, 800 Smithe Street, Vancouver at 10am.

Council for the Attorney General of Canada gives opening remarks

Today, the Counsel for the Attorney General of Canada (AGC) gave their opening remarks in defense of Canada's universal public health care system. Over the next two weeks, their witnesses will testify about the federal government's role in health care, the initiatives the federal government has taken to reduce wait times, the effects of a two-tier health system on equity for Canadians and that health inequalities will increase across the country if Cambie were to be successful in their case.

Starting tomorrow, the court will hear from the various intervenor groups (including us) and the lawyers from the Attorney General of Canada.

The Defense, the Attorney General of Britisth Columbia, will start their case on May 7th.

The primary plaintiff in the Charter Challenge against BC’s Medicare Protection Act, President and CEO of Cambie Surgeries Corporation Brian Day, took the witness stand this week as his lawyers continue to present their case aimed at removing the prohibitions on extra billing and private insurance.

Almost the entire three days of Day’s testimony centred on his cross-examination by the lawyers for the defendants, the Province of BC.

The summer break is over, and the Cambie trial is back in the courtroom as of this week. There will be three weeks of witnesses, including Brian Day (starting September 17), on the stand over September. During the week of September 24, when the Cambie trial is not sitting, Judge Winteringham will hear the injunction application being brought by Cambie.

Section 18.1 was a new section added to the Medicare Protection Act. The NDP Government enacted this legislation in April - see our press release about Bill 92 HERE. Section 18.1 puts limits on direct or extra-billing in a diagnostic facility - in other words, enrolled physicians cannot charge patients directly, or more than the negotiated fee with the Ministry of Health.

Because there were changes to the legislation that this trial is based on, Day's lawyers had to amend their Notice of Claim to make sure it related to the current, updated legislation, specifically relating to Sections 17, 18 and 18.1.

Judge Steeves ruled however, that since Section 18.1 is new legislation (it did not exist in the Medicare Protection Act, which the current trial is based on) and neither Cambie and Specialist Referral Services are directly affected by the legislation since they do not offer diagnostic services, it could not be included in the current civil claim filed by Cambie. They would have to start a whole new claim - which they now have done, and have added a new claimant - Surrey MRI Clinic.

There are still a number of steps before this becomes an actual case in the courts - we will keep you posted.

You can read our press release HERE.